Delta has sent out targeted emails to members of the Delta Skymiles program giving them a free 14-day trial to Disney+.
Read More

Southwest Airlines recently announced changes to one of the most lucrative flight and travel benefits in existence. Travelers will now need to earn 125,000 miles for the Southwest Companion Pass.
Read More

Delta members living in Washington state will be excited to learn that Delta 12Status is back for a fourth year. The promotion awards free miles based off the Seahawks passing yards but also carries several other perks.
Read More

Chase has added a 30-percent bonus for point transfers to British Airways through mid-June. This is the first time Chase has ever offered a transfer bonus to one of its travel partners.
Read More 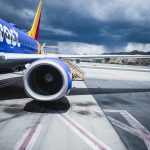 Southwest Airlines is currently running a promotion allowing Rapid Rewards members to buy Southwest points with a 50 percent bonus. But — don’t do it!
Read More

There’s another option to fly to London. JetBlue Airlines announced on Wednesday that starting in 2021 it will begin flying to London from New York City and Boston.
Read More

Receive just one email per week with free travel tips and advice!

Advertiser Disclosure: We recieve compensation when users make purchases from selected links to products or services. Banner advertising is paid for by advertisers (we do not directly control the banner advertising on this website).